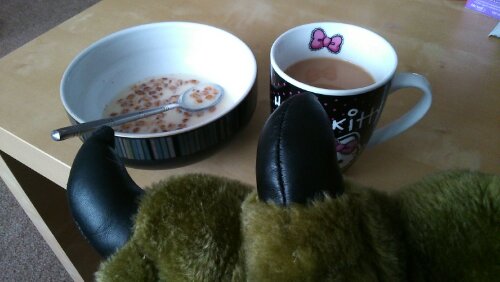 At the beginning of the year I chose nurture as my #oneword365 and as we are now in February it’s probably an idea to think about how that is going.

I am currently sat in front of the television with a blanket wrapped around my shoulders and my husband’s monster slippers on. I have a cup of decaf tea and a bowl of sugar puffs.

My 4 month old has gone down for a nap and my slippers and cardigan are in the same room.

I consider the week ahead, our timetable of events. I feel more awake than I have for a while thanks to a good night’s sleep.

As a parent, I realise that talking about sleep, naps and being pleased my son does both can be a source of contention. In fact talking about children in general opens you up to a plethora of responses – some less than desirable. The only thing I know about is my own son. I don’t paint myself as an expert, a super parent or earth mother.

In some respects to nurture myself as a mother I should simply avoid opening my mouth to speak about anything child related but that has never really been my style. I have learnt that you need to have a thick skin and to keep talking. I have also learnt that the world of motherhood can be the most cliquey arena of all. Let’s all just talk to each other a bit more hey? At groups, in coffee shops etc… It’s not a competition, why don’t we try nurturing each other a bit more?

As a Christian, I acknowledge that I have fallen into the trap of believing there is a specific mould I should fit in to and that had rendered my silent for a while. Instead of nurturing my faith I hid away becoming slightly insular, turning up but not really being there. That’s stopped now. I speak, I contribute, I use my voice. It was quite easy to convince myself that nurture was about keeping safe and quiet.

As someone who likes to blog, I wrote a post at the beginning of the year about nurture and then stopped blaming time constraints or making excuses for my lack of posts. So easy to do, so easy to avoid writing posts but as someone who is fairly creative it wasn’t nurture just simply avoidance and giving in to the ‘I’m so busy’ mentality. The same with reading…

So it could seem like I haven’t been doing so well at nurture.

But I don’t feel that way. This isn’t a post about beating myself up because I think I have failed.

It has been about discovery, for the first month of this year I have been discovering what nurture isn’t and challenging my own perceptions of it.

I have spent a lot of time with friends, enjoying their company, asking for support when needed.

One month in and I don’t think I’m doing so badly at nurture at all.